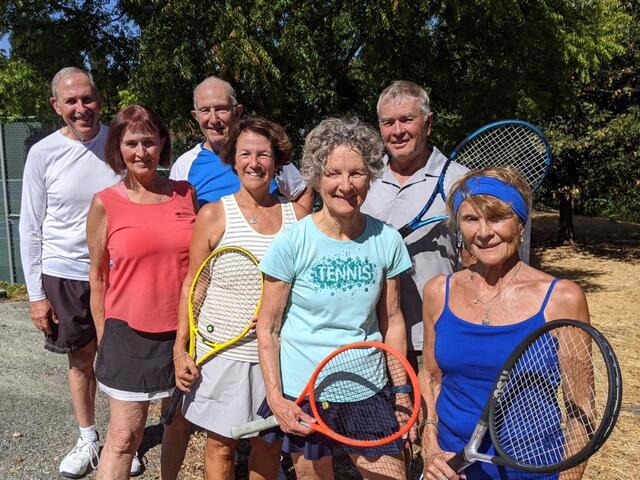 On a beautiful morning at 8 am Thursday Sept 30, 2021 the designated 8 team players assembled at the Gateway parking lot to carpool the distance to play against the Fremont Tennis Center Super Seniors team. Thank you to Yvonne Merrick, Terry Quinlan and Mary Jane Kiefer for driving and Linda Hague for navigating.  The team arrived in Fremont well ahead of the scheduled play time and were able to get a good warm up prior to match time.

The Fremont ladies were very warm and friendly and a good time was had by all.  Thank you to the team members who arose early and who played so well. 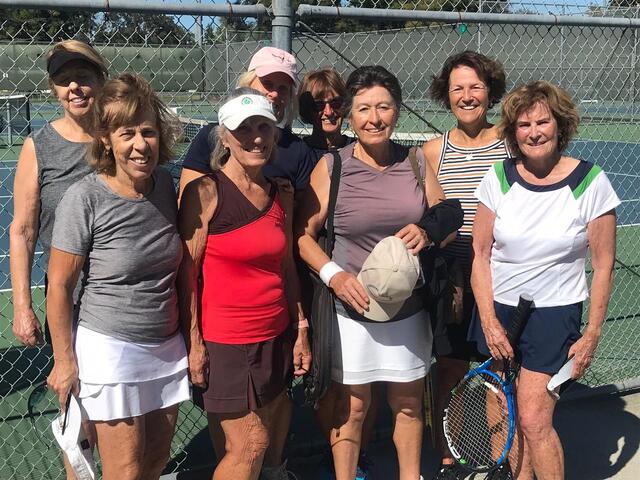 The Rossmoor Tennis Club is setting up a new format to make singles play more accessible to Rossmoor players who previously enjoyed the Tuesday and Thursday Open Tennis before the pandemic struck. It can also help players new to Rossmoor find partners who play at their level. All Rossmoor residents are welcome.

Starting Tuesday, Aug. 11, three courts will be reserved on Tuesday and Thursday between 10 a.m. and noon for Drop-in tennis. Court 4 will be designated for Less Aggressive players, Court 5 for Intermediate players and Court 7 for Advanced players. Players are encouraged to choose the court where they are well-matched with the other players on the court.

Play will still be singles only but with unlimited rotations under the new rotation rules. A player will enter the court ready to serve using their own personally marked balls. The player who just served will put their personal balls away and rotate to the receiver position. The person who just received will leave the court to wait outside the fence at the back of the line of players waiting to play. Players will use no-ad scoring to keep the rotation going quickly. Players waiting to rotate in must wear masks, keep 6 ft spacing and use only a personal seat.

If this new Drop-in play proves popular, additional courts will be reserved for it.

The Tennis Club is continuing to look for ways to make the singles game more enjoyable for all Rossmoorians. General information about the Rossmoor Tennis Club can be found at www.rossmoortennis.com.

State and County Health orders still allow only Singles play for tennis.  Despite this, the courts at Rossmoor are busy every morning with players enjoying a game.  Others come out later in the day for some extra practice and exercise.

However not all players have the stamina for continuous play in a Singles game so the club has recently worked with GRF and agreed on a rule change to allow rotation of additional players.  This will give players longer breaks during the game.
A new player may rotate into the court as one of the other players rotates off after each game or several games. Only two people can be on the court at any time. One must be outside the court before the next player enters.

All other existing rules must be obeyed:  social distancing at all times, no shared equipment (personal chairs and separate tennis balls must be used).  Rotating players in does not increase the 60 minute time limit if others are waiting for a court.
The Rossmoor courts remain for RESIDENTS ONLY.

The tennis club hopes this change will bring more players out to enjoy playing on our beautiful tennis courts. 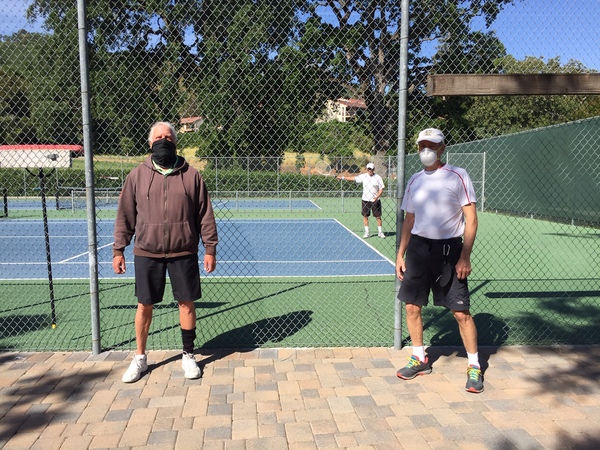 The Oaks team hosted Walnut Creek on February 3.  Despite a strong win the previous match and best efforts all round they were defeated.

The Oaks traveled to Chabot Tennis Club on Jan 27. The team is pictured relaxing before the match.  The Oaks were the victors, 8-4, over their Chabot opponents.

News Articles about each Tennis Event