Men's Team Win against Round Hill

The Rossmoor Men's Tennis team took on the Round Hill Country Club squad in a Senior Men's Interclub League (SMIL) match on February 5 at the Buckeye courts in Rossmoor.  There was not a cloud in the sky, and the sun was shining very brightly.  This condition made lobbing an even more effective tactic than usual!

The Rossmoor team prevailed 3-1.  The results for each line were as follows:    At line 1, Chris Slee and Bernie Wolf won a hard fought contest 7-5, 6-2.   At line 2, Larry Barclay and Al Peters won their first set 6-3 and were ahead 5-4 in the second set when their opponents retired.  At line 3, David Hickey and Barry Brian won 6-2, 7-5 by fully employing the "lob into the sun" strategy.  At line 4, Chris Christopher and Nicky Abdolhosseini played a tough match but lost 4-6, 4-6.

Ken Steiner was the Rossmoor captain for this match and shared these insights into his team’s victory. The next match for the Rossmoor Men will be March 4 at home at 11am.  The team welcomes all who would like to come out to watch some entertaining tennis.

The Men's Team secured a victory on Jan 22 over Moraga Country Club. The start of match play was delayed due to wet courts and many of the team members came out early to help dry off the courts so that they could be playable.  The teams then enjoyed their lunch while waiting for Mother Nature's help with the sun to finish drying off the courts.  By noon the play began under clearing skies and bright sunshine. 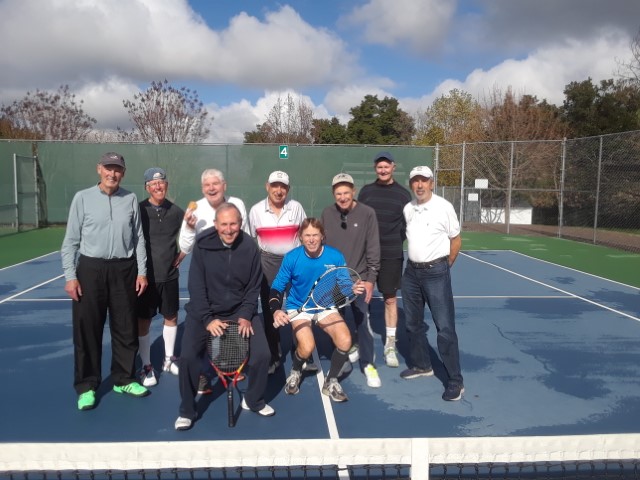 Sadly, line 2 with Ken Steiner and Dave Hickey could not be played as one of Moraga's players was injured in a fall early in the first set. Rossmoor's Nick Abdolhosseini stepped up to give the group a game.

Line 3 was Dave Kern and Stuart Coffey.  This went to a third set tiebreaker also with Rossmoor winning, 4-6, 7-5, and 10-2.  Finally at line 4 Barry Brian and Dave Besenfelder also went to a third set tiebreaker winning 6-7, 6-2 and 10-5.  The team thanks acting captain Bernie Wolf and all the other team members who came out to help ready the courts and cheer the team on.

On Wednesday January 8, captain Jerry Quinlan took the Rossmoor Men’s Tennis Team to Oakland for a match against the Oakland Hills Tennis Club.  Oddly enough, the Oakland Hills club is located in the hills of Oakland. The view from the tennis courts was breathtaking as we looked westward across the bay and the bridges towards San Francisco, but not as beautiful as the views we share everyday here at Rossmoor. 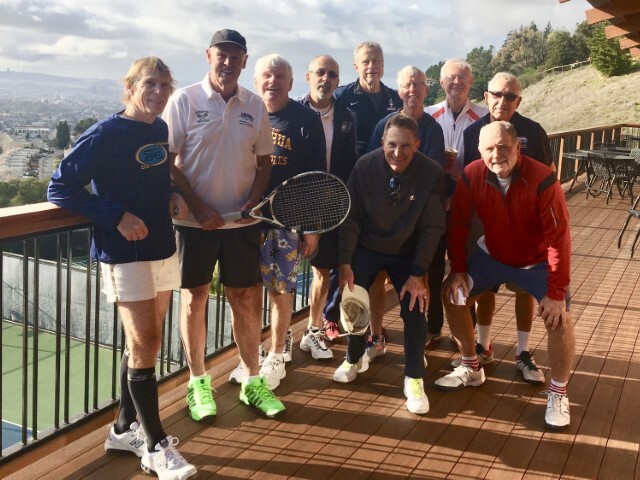 The match was scheduled to start at noon but due to wet courts the first game was postponed until 12:45 for the first game. Line 1 for Rossmoor was Larry Barclay and Steve Graham who lost to the Oakland Hills team 6-2 6-4. The score is not indicative of the great game played by the team from Rossmoor with Barclay's solid serving and Graham's play at the net.

Line two was more successful with David Besenfelder and David Kern coming out on top 6-4 6-4. The win made possible through Besenfelder's aggressive overhead slams and Kern being able to return any ball hit in his area.

Line 3 was a quick match for Bernie Wolf and Chris Slee, overcoming Oakland Hills men 6-2 6-1. This was the first match finished. Wolf and Slee are not only Rossmoor neighbors but do very well next to each other on the tennis court.

Line 4 had a solid performance from Al Peters and David Hickey. After a tough start losing the first 3 games to Oakland Hills,  Al's left handed play and David's consistent  ground strokes allowed them to come back and win the match 6-3 6-1.

Line 5 was the most difficult match of the day being won by Stuart Coffey and David Corliss. Oakland Hills won the first set 6-2 but the Rossmoor men won the second set in a close tie breaker 7-5.  Having split the sets, a 10 point tie breaker was then played to determine the overall winner and the good guys again stood strong with an inspiring 10-6 win.

Overall it was a wonderful day in Oakland.  We would like to thank the Oakland Hills Tennis Club for a fine day of tennis, good views from the tennis courts, great friendship, and especially a wonderful lunch overlooking the San Francisco bay.

RTC Men Run Into a Buzz Saw at Round Hill

At Line 1, Larry and Frank came up against a former collegiate player and his team mate who were both very strong, as the final score denotes. They fought back in the second set and only a single point made the difference between winning and losing the second set.

Bernie and David, playing at Line 2, were overcome by a huge server by the name of Mike. Mike not only had a big serve, but he also had smooth finesse and touch, hitting many drop shots for outright winners. Power and finesse in the same player is very unusual.

Line 3 players Jerry and Dave had many chances to win but were overcome by a wily RH team. The final 10-point tiebreak third set was a nail biter with the lead changing hands many times.

Line 4 players Barry and Ron, having lost the first set, were up 5-2 in the second, but, alas, their opponents made a comeback and won the second set. What a revoltin’ development!

Chris and Murray played at Line 5 and were the only Rossmoor team to win. Hey, one out of five is better than none.

The team thanks Larry Barclay for handling the captain duties.

NOTE: Prior to the first match of the season, Rossmoor SMIL Coordinator Dave Kern, via email, will provide all team members with League Rules, a SMIL Captains List, and League Schedule. This SOP supplements that information and provides volunteer Rossmoor captains with information to better handle their duties.

The seven member teams are:

There are six other teams in the league.  There is a single league coordinator who makes schedules for all of the teams, but that is as formal as it gets.    The idea of this league is for everyone to get a chance to play against other clubs and to socialize afterward.   This league was formed to make tennis an enjoyable game for all of us.  For additional information, especially if you would like to be on the team, contact Dave Kern, the inter-league coordinator for Rossmoor.   Practices are on Mondays, matches on alternate Wednesdays.

Here's how it works:

*Start times for practice and matches may be moved to earlier times in extreme hot weather.  Players will be notified in advance by group emails of these changes