Men's Team Win against Round Hill

The Rossmoor Men's Tennis team took on the Round Hill Country Club squad in a Senior Men's Interclub League (SMIL) match on February 5 at the Buckeye courts in Rossmoor.  There was not a cloud in the sky, and the sun was shining very brightly.  This condition made lobbing an even more effective tactic than usual!

The Rossmoor team prevailed 3-1.  The results for each line were as follows:    At line 1, Chris Slee and Bernie Wolf won a hard fought contest 7-5, 6-2.   At line 2, Larry Barclay and Al Peters won their first set 6-3 and were ahead 5-4 in the second set when their opponents retired.  At line 3, David Hickey and Barry Brian won 6-2, 7-5 by fully employing the "lob into the sun" strategy.  At line 4, Chris Christopher and Nicky Abdolhosseini played a tough match but lost 4-6, 4-6. 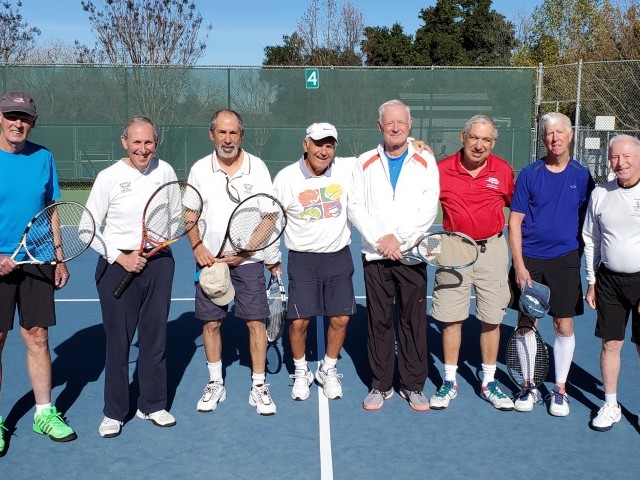 Ken Steiner was the Rossmoor captain for this match and shared these insights into his team’s victory. The next match for the Rossmoor Men will be March 4 at home at 11am.  The team welcomes all who would like to come out to watch some entertaining tennis.